If you have kids and haven’t been regulating what goes on in your home with regards to the TV, I hope you really consider each item in the list below. If you don’t have children yet or if they’re still very young, I hope you soak up this information so you can stand firm and make informed decisions regarding your family’s TV watching.

Most kids watch way too much television. Children 2-5 watch 32 hours a week. That’s a 4 day work week! 71% of 8-18 year olds have a TV in their bedrooms. It is doubtful if any real parental control is occurring in these situations. Over 66% have the television on during family meal time. So much for good family discussions around the table.

Children who watch television are less physically active. Based on less activity and snack advertising, families who watch TV are more likely to be obese. Obesity is a leading cause for MANY preventable diseases. When you sit down to watch a movie, do you also tend to snack on chips, popcorn, peanuts or ice cream? Which guilty pleasure do you chose?

Television has a negative consequences on brain development. Some research indicates there might be a linkage between early TV watching with ADHD and other attention deficit disorders. TV watching hurts cognitive development  of children under 3 years of age. American Academy of Pediatrics suggests NO television for children under 2. As a grandparent, I first inwardly scoffed at my daughter who is making a determined effort in this direction.  I now realize, I should have outwardly praised her.

There is an EXTREME amount of violence portrayed on television. American children will view 200,000 acts of violence and 16,000 murders by age 18. Is there any doubt about the impact of this viewing upon our children? Most TV acts of violence go unpunished and the resulting suffering is minimized. Sadly, humor is often associated with violence, instead. Extensive research points to more aggressive behavior, nightmares and fears of being harmed by children watching television.

Children who regularly watch TV have less empathy. It shouldn’t be surprising that Children watching 200,000 acts of violence grow numb to abuse and violence. If the consequences of this violence are minimized, children will naturally have less compassion. What type of children or grandchildren do you desire? I want compassionate ones.

Kids and more likely to get involved with risky ( sinful ) behavior. When children watch their favorite characters, smoking, drinking, and engaged in sexual situations, they envision themselves doing those very things. This increases the likelihood of their participation in such activities. Experts believe that a linkage exists between ever increasing sexuality on TV and younger children becoming involved sexually. (Monkey see – Monkey do).

Most of the individuals involved with the creation of our television programming do NOT have a Christian worldview. After reading the list above that is clearly obvious. However, even some of the good programming, about animals and geology and the sciences have a drumbeat of naturalistic thinking. The notions of right and wrong and standards around good and bad become clouded in relativism.

One of the hardest things about limiting how much TV our kids watch is that we as the adults have to set the example.  Do you want to take a possible first drastic step?

What you can do about it

Remove all the TVs from your home except 1 from your family room. Have a family meeting on a Sunday evening during dinner and negotiate what programs the family will watch that week.  Limit it to an hour or so an evening. If your kids are young, it will be easy – you’ll win. If their older it will require some good positive work and compromise.  GO FOR IT!  I’m rooting you on.

In my book, Modern Parables for Financial Freedom there is an entertaining story called the ‘The Vision Maker‘.  Read it and consider how it relates to the list above.

Here’s a book from focus on the family – Plugged-in Parenting – that could help you navigate these issues. 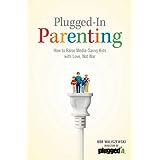