As a kid, I found this phrase from the Our Father a bit curious.

I first learned the prayer with the word trespasses in it,  as quoted below:

forgive us our trespasses as we forgive those who trespass against us.

Although I ran through the woods quite a bit, I never violated any “No Trespassing” signs. So I thought myself quite safe.

Now a bit older I realize this portion of prayer is not so safe at all.  Augustine called it “The terrible petition“. For if we utter it with an unforgiving heart, we are asking the Lord NOT to forgive us.

Some may think this a hard thing – this conditional forgiveness that the Lord grants us. However  it is actually a joyous gift. It may be difficult at times, but It forces us to relieve ourselves of a heavy burden that can turn our hearts cold.

Years after her concentration camp experiences in Nazi Germany, Corrie ten Boom was preaching in Munich and met face to face one of the most heartless German guards in the camp . He had humiliated and degraded Corrie and her sister, jeering at them as they stood naked in the delousing shower. She had not forgotten him. Now after her sermon the guard came right up to her. She saw him coming and recognized him.  She writes:

Her old enemy said, “You mentioned Ravensbruck in your talk, I was a guard in there.”

No, he did not remember me. Corrie thought

“But since that time,” he went on, “I have become a Christian. I know that God has forgiven me for the cruel things I did there, but I would like to hear it from your lips as well. Fraulein, …” his hand came out, … “will you forgive me?”

And I stood there — I whose sins had every day to be forgiven — and could not. My sister, Betsie had died in that place — could he erase her slow terrible death simply for the asking?

It could not have been many seconds that he stood there, hand held out, but to me it seemed hours as I wrestled with the most difficult thing I had ever had to do.

For I had to do it — I knew that. The message that God forgives has a prior condition: that we forgive those who have injured us. “If you do not forgive men their trespasses,” Jesus says, “neither will your Father in heaven forgive your trespasses.” …

and I stood there with coldness clutching at my heart, but I know that the will can function regardless of the temperature of the heart. I prayed, Jesus, help me! Woodenly, mechanically, I thrust my hand into the one outstretched to me and I experienced an incredible thing. The current started in my shoulder, raced down my arms and sprang into our clutched hands. Then this warm reconciliation seemed to flood my whole being, bringing tears to my eyes. ‘I forgive you, brother,’ I cried with my whole heart. For a long moment we grasped each other’s hands, the former guard, the former prisoner. I have never known the love of God so intensely as I did in that moment!

In my book Modern Parables for Financial Peace there is a story called The Security Deposit, where a man get’s to experience the same incredible joy that Corrie felt when she shook the guard’s hand.

Is there someone you need to forgive?  Joy awaits you. 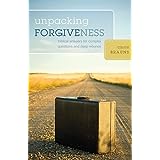