Her back ached and her stomach murmured, with a silent sore hunger. She straightened up with a few straggling sticks in her hand and gazed at the gate and stonewall that circled the city. Her husband crushed, repairing the very gate, she stood without. The memories of his love crammed away like the kindling she now stuffed in her satchel. The sticks would fuel a flame to feed a final meal for her only boy and perhaps her too.

Rumor had it that a crazy man had cast a spell upon the climate which had ruined the rains. His rant against the king and her very own queen had quenched the heavens. She had witnessed firsthand the vanity and vice of the women they now called queen. Regardless, this prophet had inflicted ill on the region. Why should the entire country be cursed for the wickedness of one woman? She would like to choke this man of God who had delivered destruction upon her household.

A bedraggled Bedouin of a sort appeared and circled the city’s entrance, seeking someone. Closer look revealed him as a Hebrew – a foreigner.  He called out to her in a note of desperation, “Woman, would you bring me a little water?”

In spite of her conditions, her heart went out to the eccentric immigrant, who looked as troubled as an orphaned lamb. As she approached him, she knew she would open her home, her heart, her own health for this man who needed her help.

Through her humble hospitality and perhaps her faith, the lord blessed the little she had. May the Lord of heaven open our hearts and multiply His good desires that well within our spirits.

Read Modern Parables for Financial Freedom; it has a true modern story of how our sovereign Lord chose to multiply the meal of Mac & Cheese for a young couple and their guests.

Here is book on hospitality.

A Life That Says Welcome 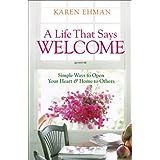 One thought on “Inspiring Hospitality”